Underground waterproofing resulted in one of our top ten claims, in terms of cost, between 2010 and 2013.

The main reasons for water ingress in underground rooms, including accommodation, store rooms and car parks, was not because the product had failed but because the design was unsuitable with the wrong products specified and the installation of the waterproofing system being poor in quality.

We have picked out the most common issues occurring from bad design, use of materials and workmanship.

A lot of the time we realised that no one took responsibility for the waterproofing. Or in some cases, a member of the design team would choose a water proofing product but it would then be left to a member of the site team to install. In this case, the site team could be seen to try their best to install, but without real knowledge or understanding of the products, they were applied incorrectly.

There are also some common but simple errors that destroy an otherwise good approach; an example being water proof concrete, this can work reasonably well in the right ground conditions, but any hairline, shrinkage cracking leads to leaks, so it must be correctly specified. However, the biggest problem is where joints are formed, penetrations by columns exist and best of all where services are later drilled through providing a route for water ingress.

In one claims case the waterproofing was correct, the drainage was almost correct, but the membrane finished about 400mm below finished ground level and the system was simply inundated with surface run-off water. Eventually, the drainage couldn’t cope, the system was overwhelmed and the accommodation filled with water – literally! 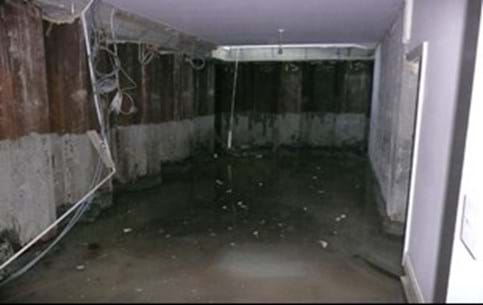 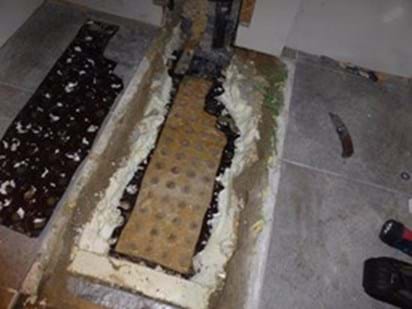 Another common issue is the lack of consideration to the construction. Free lime can block cavity drainage membranes particularly where no access for maintenance is provided. Ground water running through, across or over concrete can lead to significant build up of free lime and it can be very difficult to remedy.

What you can see beneath the black cavity drainage membrane is compacted free lime!

Although it might seem obvious, to avoid problems with your waterproofing we would always suggest proper investigation, good design and workmanship by the right people.

Always follow the guidance in the British Standard, in this case BS 8102. As the first warranty provider to insist on a Certified Surveyor in Structural Waterproofing (CSSW), we realised the importance of having an expert as part of the design and site team as recommended in the British Standard. We have also enhanced our Technical Manual and provided specific requirements, and guidance on how to achieve appropriate levels of waterproofing.