Premier Guarantee met with Galliard Homes, Senior Project Manager, David Hughes, to discuss why they chose a unitised facade system for their development Harbour Central. As advocates of innovative systems and products Premier Guarantee has supported Galliard Homes throughout this project with input from the dedicated High Value Projects Team.

Harbour Central consists of 7 tower blocks all constructed in one phase and all with a unitised facade system.

Figure 1: Outside image of one block in the midst of facade system being installed.

Why did you choose a unitised facade system over a more traditional system?

Unitised systems lend themselves to high rise buildings for a multitude of reasons. They create a safer working environment as units are installed using a hoist from the inside of the building so no need for external access systems. This then significantly reduces the installation time as works can progress faster and on multiple levels reducing programme periods. It also reduces the number of different contractors needed to design, supply and install a wall panel which also reduces hand over and inspection interfaces that can in turn take up programme time. Minimal material laydown areas are required as panels are loaded straight to the required floor level on a just in time basis. During the wall panel assembly there is less room for human error as each panel is made in a clean controlled factory environment and must go through a rigorous QA process ensuring a high quality product.

What allowances did you have to make working with a unitised system?

Constructing facade systems using more traditional methods can allow for last minute design changes as modifications can be made onsite. However, this is not possible with unitised systems as the design has to be complete well in advance so that materials can be procured and shipped to the factory, for panels to be fabricated and assembled, and for QA checks to be completed before they can be shipped to site. Many unitised fabricators are based overseas so shipping times need to be considered as well. This meant that a strict design programme had to be followed to minimise any site delays as for this project there is a 24 week lead time from when designs are signed off to the panels being manufactured and arriving onsite. As a consequence the architectural designs must be ‘frozen’ well in advance so that they can be converted into builders work designs which are then sent to the factory to provide instructions for the order.

How did your programme lead in times compare with other projects using traditional facade systems?

For a traditional curtain wall project an 8 week lead in time is possible, but 12 weeks is more normal, however during the design period problems can arise. There is a lot of pressure on all the project teams to identify and resolve information gaps and clashes very quickly and to manage multiple specialist contractor design teams all at the same time, this can result in an environment that increases the risk for errors or oversights. This traditional method also introduces multiple trades, each having their own design responsibilities, responsibilities which have to be carefully managed so that they do not overlap.

How has unitised benefitted this project?

Using a unitised system has meant we’ve been able to make the building weather tight much quicker allowing the internal fit out programme to be accelerated, and for potential water damage to be mitigated. Working with Yuanda we have been able to install 1 floor of 104 unitised panels in a week whilst simultaneously progressing another one. The standard programme period for each floor is 2 weeks therefore a tower of 20 storeys can be sealed off in 40 weeks. Yuanda were responsible for the balconies which were unitised, so that each balcony unit included the lighting and associated wiring, decking and drainage. By including this in their package it was easier to keep track of what had been completed onsite and prevented other trades from damaging preceding tradeworks. This simplified Premier Guarantee’s warranty inspections because the integrity of the balcony unit was maintained right through all stages of the design and installation. Only the glass balcony hand rail was installed separately.

What other packages did you add to facade contractor’s package, that you wouldn’t have normally?

As well as the balcony lighting and decking mentioned previous we also added the fire stopping, slab edge flanking acoustics and the vapour control layer and waterproofing packages into the facade package.

Presumably this meant that you ended up with fewer subcontractors on site?

Yes, not only do we have fewer specialist contractor companies onsite, but the unitised approach means that the total number of operatives onsite is much less, which also means that the resources and facilities needed to support them is significantly reduced.

Although unitised systems are widely used across Europe and other parts of the world, there are still a limited number of factories that can manufacture unitised facade panels to the quality that we require and to the volume needed. The manufacturing slots of these factories are often booked up a long time in advance so it is important for us to engage with these companies early on. On this project we approached 5 factories and 4 of them said they were fully booked for 2017, we secured Yuanda’s facilities by booking it 8 - 10 months in advance. Travel times and length of journeys also need to be considered as these can be affected by weather conditions and potential delay.

Unitised systems work to tight tolerances, and on this project we have had to adjust our practices to accommodate these. This is not necessarily a disadvantage, but it is something to be aware of.

How do the costs work out overall (cost neutral, more expensive)?

Although unitised systems initially appear more expensive than more traditional curtain wall systems quantifying costs on a like for like basis is difficult. When utilising a traditional curtain wall system there are multiple following trades, all of which need cranage, facilities, laydown areas, management and quality inspection. In addition when using a unitised system there are substantial cost advantages to be obtained from accelerated on site programmes (reduction is site prelim costs and quicker sales), and then of course there are the less immediately tangible cost benefits of a factory quality product, early cost certainty and having one point of design responsibility.

Being a frequent visitor to sites and familiar with the unitised facades, the first thing that you notice when you arrive at the Harbour Central is how tidy and clean the whole site is. This is mainly down to the culture of the site (rigorously and enthusiastically enforced by David), but when you get to the working levels where the façade is being installed the clutter that is normally associated with a traditional wall panel construction is noticeable by its absence; on adjacent levels it would be difficult to guess that facade works were being undertake above or below. 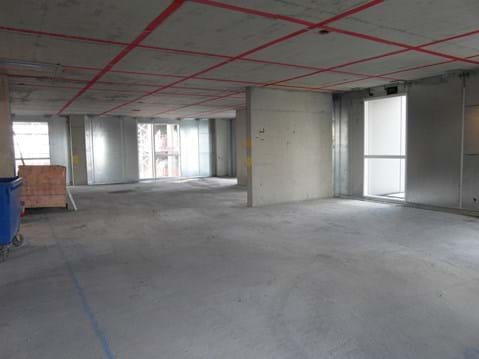 Galliard has embraced the unitised concept and taken it one step further by looking closely at other building elements which interface with the façade and considering and adapting these so that the benefits brought by the unitised are maximised. A great example of this are the slab edge acoustic and fire stopping elements, which have been modified to generate a robust waterproof perimeter, which allows the internal fit out to progress below without fear of water damage from wind driven rain entering from the floors above. As well as generating an efficient high performing quality facade, the by-product of the unitised approach has been to produce a safe and clean site environment for the site operatives.

The Complexity of Facades and the Risks Involved

Why Choose a New-Build Home?